1/115 scale, molded in white with additional markings for Project Magnet Naval Oceanographic office. Originally released as the Lockheed Electra. Officially licensed by the US Navy, look for the official Navy Hologram on your kit!

History of the Lockheed P-3A Orion

The P-3 Orion was designed for use by the US Navy as a submarine hunter and replaced the Neptune. The P-3 was nearly twice as fast as the Neptune and its range increased by almost 60% over that of the P2V. The first Orion was delivered to the US Navy Squadron VP-8 in July 1962 and within six months this unit was fully equipped with P-3's.

The P-3 was developed from the Electra turboprop powered airliner. The airliner's spacious interior offered an ideal compartment for the many radar and electronic consoles necessary for effective anti-submarine warfare. The Orion's prototype was the third Electra airframe modified to the anti-submarine configuration. The overall dimensions of the P-3 are slightly larger than the Electra airframe: Wingspan is 99' 8", Length 116' 10", and Height 33' 8".

External pylons used for additional weapons stores such as torpedos, rockets or depth charges, are attached beneath the wings. As a weapon the P-3 can carry 10,900 lbs of sonobuoys, homing torpedoes and nuclear depth charges. The entire weapons load may be dropped in 20 seconds if necessary.

The prominent "stinger" extending from the Orion's tail houses a MAD antenna (Magnetic Anomaly Detector). This system is sensitive to very small changes in the magnetic field of the Earth, typical of those caused by a submerged vessel or other target. The MAD detector is capable of locating the target with sufficient accuracy to make effective use of the Orion's weapons.

Another submarine detection device carried by the P-3 is called a Trail Detector. This sensitive machine "sniffs" the air for hydrocarbon exhaust fumes emitted by diesel engines and sounds an alarm when an appreciable amount of the fumes are encountered. Also mounted under the starboard wing is a high intensity anti-shipping searchlight.

Radar scanners, located in the nose and tail of the plane, provide 360-degree coverage on one scope. Four bulged observation windows are located in the fuselage sides for visual sightings.

Four Allison T56-A-10W turboprop engines deliver a total of 16,200 e.s.h.p. for a maximum speed of 470 mph. For greater fuel economy the Orion normally cruises on two engines. So much reserve power is available that the P-3 can climb on only 2 engines at full combat weight. Normal loaded weight is 125,000 lbs.

In 1962 the P-3's flew operational flights in the enforcement of the Cuban Blockade. This operation provided actual proof of the ability of the Orion to ferret out unwanted visitors.

Your model of the Lockheed P-3 Orion carries the markings of VP-8 Patrol Squadron, the first to operate this spectacular aircraft. VP-8 is based out of Patuxent, Maryland. 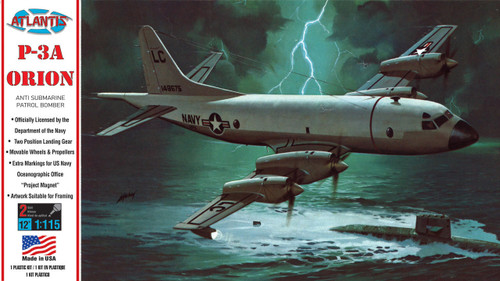