The Bf109 is one of the Luftwaffe's most famous World War II fighter aircraft. More than 33,000 Bf109's were built in many different versions. Both its climbing capability and acceleration in the dive were two of the Bf109s strong points. In production since the summer of 1942, the Bf109G series displayed some noticeable changes compared with the previous Bf109F version. The G-5/G-6 had a MK 151/20 mm cannon firing through the engine. Two MG 131 machine guns were installed above the engine. The belt-feed to the uprated armament necessitated aerodynamic modifications to the engine cowling's which gave the aircraft its characteristic bumps .
The G-6 was used extensively on all fronts from March 1943 until the end of the war. Later production lots of the Bf109 G-6 were given fixed rear cab windows in a one-piece design which vastly improved visibility to the rear. During a further modification the tail was fitted with a rudder that was higher and had a larger area than previous models. With a total of 13000 units, the G-6 was the most widely produced of all Bf109's.

Decals for the following versions: 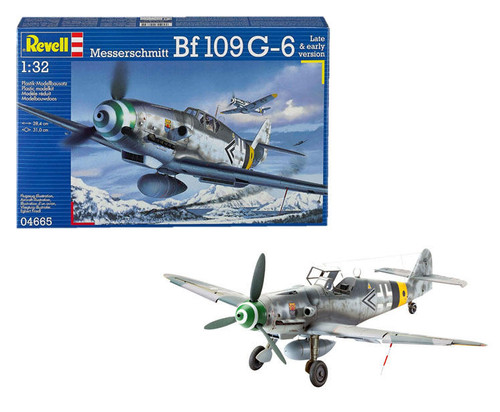