During World War II, the US military used a variety of small aircraft produced by different companies in various major battlefields for communication/observation purposes. In response to the militaryâ€™s request, the small flute company produced a series of L4 different models ofâ€™grasshopperâ€™ communication/observation machine. The L-4 model was numbered (O-59) by the US military. /D/F/E/G/H and J type. The L-4 is a high-wing design. Although it is only propelled by a small four-cylinder 65-horsepower engine, the whole body is made of aluminum and steel tube combined with outer fiber cloth, so the whole aircraft is only half a metric ton, about only It is heavy for an ordinary jeep car. In addition to being used for liaison and aerial observation, the L-4 can also be used for training, transporting wounded soldiers, and even being converted into a small attack aircraft by adding a rocket launcher. The L-4H is improved from the L-4B type. It is widely used in artillery and frontline combat units in battlefields, and part of this aircraft is also supplied to other allies. After World War II, L-4 was used in the Korean War until later (O-1) L-19 appeared as its replacement. 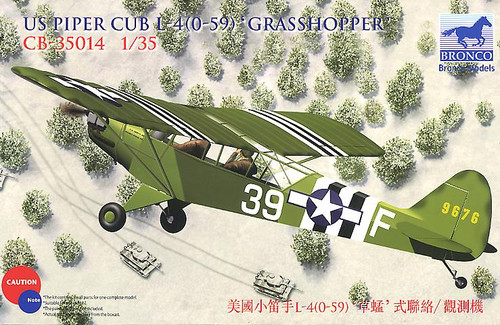