The Laffly V15T all-wheel drive army vehicle was created in 1938, and in 1939 it began to enter service with the French army. It was used for various tasks, but at first its main purpose was towing the 25 mm Modèle 1934 Hotchkiss anti-tank gun. Among other army vehicles, Laffly’s equipment stood out for its unusual chassis design – auxiliary wheels in the bow and under the central part of the body. These wheels were intended to improve the car’s cross-country ability on the battlefield.

Laffly only produced 100 cars. Further, the La Licorne company, which produced this tractor at the automobile plant in Courbevoie, was engaged in its production.
Part of the Laffly V15T cars were equipped with Hotchkiss machine guns. These machine guns were distinguished by an original power supply system (cassettes of 25 rounds each) and a massive bronze radiator that cooled the barrel. Machine guns were installed in the back of a car, in the transport compartment, and could be used both for fire support of units and for firing at air targets. 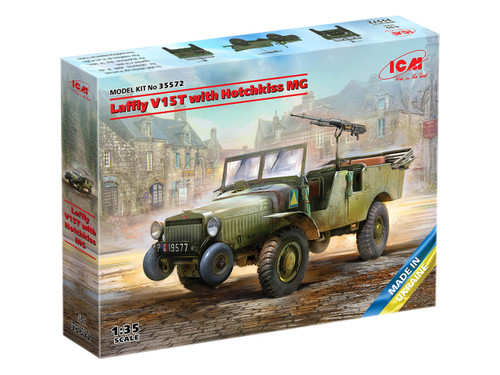