Drawing on experience gained operating U.S. & British tanks in heavy combat, the Merkava was designed after the Yom Kippur war of 1973, and after several prototypes were tested and improved, the new tank went into production in 1977. Design features included a troop compartment in the rear accessed by a unique split hatch reminiscent of APC’s, a 908 Hp Teledyne Continental AVDS 1790-6A diesel engine mounted in the front of the hull for increased crew protection from the front, and a flat, arrow-shaped turret housing a powerful license-produced fully-stabilized version of the US rifled 105-mm M68 tank gun. Up to 62 rounds can be carried, including APFSDS, HEAT, HE-FRAG, and smoke rounds. Secondary armament comprised of two US 7.62 mm machine-guns and a third heavy Browning .50 caliber could be mounted on top of the commander cupola. An external 60 mm mortar could be fired by an operator from the nearby hatch. The tank features a Laser Range Finder and a digital fire control system, and enjoys NBC protection and an automatic fire extinguishing system. The Merkava can carry up to 10 fully equipped troops, as well as its crew of 4, consisting of the driver, gunner, loader, and commander. A total of 250 tanks were produced until 1981.

The Merkava Mk.1 saw combat in Lebanon in 1982, and began featuring upgrades which ultimately led to the more advanced Mk.II. These interim tanks became unofficially known as ‘Mk.I Hybrid’. Improvements adopted by the Merkava Mk.I were the modification of the shot trap beneath the turret bustle and introduction of heavy steel balls suspended by chains, the mortar position was relocated, and armor protection was generally improved. 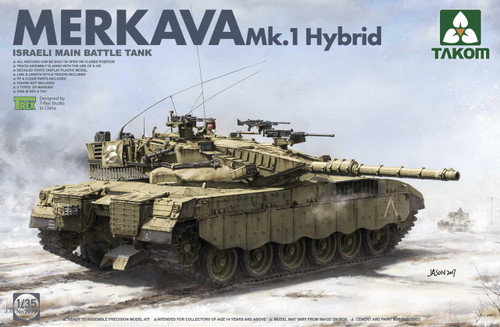