Named after Sergei Mironovich Kirov, a Communist Party official assassinated in 1934, the SMK was among the designs competing to replace the unreliable and expensive T-35 multi-turreted heavy tank. A design team under Josef Kotin at the Kirovski Works at Leningrad designed the tank, which was later misidentified by German intelligence as the T-35C. Powered by the 850 hp Mikulin GAM-34T liquid cooled aircraft engine, the tank featured torsion bar suspension and could reach a top speed of 35 km/h (22 mph) with its 7-man crew. The SMK's main armament was a 76.2 mm L-11 main gun in the main upper turret and a 45 mm M1932 gun in the lower forward turret, supplemented by three 7.62mm DT machine guns. Only one was built, and after trials showing the downsides of its weight and size against the KV tank (and brief service with the 91st Tank Battalion of the 20th Heavy Tank Brigade at the Battle of Summa in the ‘Winter War’ with Finland in 1939-40, where it was immobilized by an anti-mine and left unrecovered for 2 months), the project was dropped in favor of the KV. 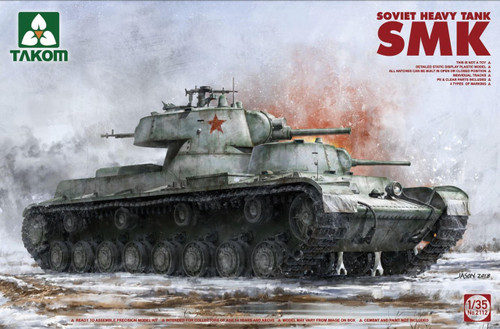