The outbreak of WWII in Europe caused the U.S. Army to recognize it was lacking an effective tank force. Design of the Medium Tank M3 commenced in July 1940, with production beginning in December, and the first units became operational in late 1941. The U.S. Army required a medium tank armed with a 75mm main gun and the United Kingdom had made an immediate demand for more medium tanks. The odd design archaically mounted the 75mm main gun in the right sponson, with another 37mm gun mounted in a small turret on top, which was a compromise meant to produce a tank as soon as possible until the M4 became available. In Britain, the tank was called by two names based on the turret configuration and crew size. Tanks fitted with the US style turrets were called the "Lee", named after Confederate general Robert E. Lee. Variants using British style turrets were known as the "Grant," named after Union general Ulysses S. Grant. The M3 offered potent firepower and sturdy armor, but had serious shortcomings in its general design and shape, including a high silhouette, and the sponson mounting of the 75mm main gun, which limited traverse and prevented the tank from taking a hull-down position. It also featured riveted construction (creating deadly internal projectiles with non-penetrating hits), and limited off-road performance. Multiple variants and derivatives were spawned from M3 production, including the M31 Armored Recovery Vehicle, M7 Priest Self Propelled Gun, and even the Canadian Ram cruiser tank.

Of the 6,258 M3 variants manufactured in the United States, 2,855 were officially handed over to the British government thanks to the Lend-Lease Agreement of 1941. The M3 Grant first saw action with the Royal Armoured Corps in North Africa during May 1942. However, most of the M3s ordered by the UK quickly became surplus to the requirements of the British Army, and 1,700 were transferred to the Australian Army for home defense and training duties in Australia. The British Indian Army also received 900 Grants, and a further 1,386 Lee’s were exported directly from the US to the Soviet Union, although only 976 of these reached Russian ports due to German U-boat and air attacks on Allied convoys transporting the vehicles. 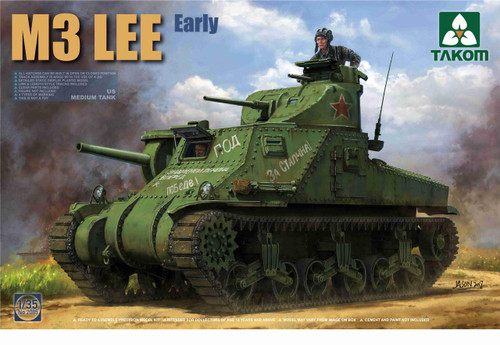