The Outbreak of WWII in Europe caused the U.S. Army to recognize it was lacking an effective tank force. Design of the Medium Tank M3 commenced in July 1940, with production beginning in December, and the first units became operational in late 1941. Experiments were carried out on specialized conversions, one of which was the T16 prime mover, which was chosen as the basis for testing a tank recovery vehicle by Baldwin Locomotive Works in 1942. These tests ultimately lead to the T2, with some 805 units being converted by December 1943. These vehicles became known as the M31 Tank Recovery Vehicle, the first vehicle of its type to be standardized in the U.S. Army.

The M31 was based on the Medium Tank M3. To keep up the appearances of a combat tank, the sponson-mounted 75mm gun was replaced by a hinged entry door fitted with a dummy gun tube, and the 37mm gun in the turret was replaced with a crane. The turret was rotated to the rear when not in use, and a dummy 37mm tube was attached to the turret rear. The turret machine gun cupola was replaced with the British hatch arrangement used on the Grant. The crane could lift 10,000lbs (4500kg) without the supporting boom jacks extended, 12,000lbs (5400kg) with the jacks attached to the hull front, or 30,000lbs (14,000kg) with the support legs on the ground. A 60,000lb (27,000kg) capacity Gar Wood winch was installed inside the fighting compartment, with the cable spooled out of the turret and over the crane boom or out the rear of the TRV. Tool boxes were also installed on the rear sponsons and above the dummy 75mm gun. 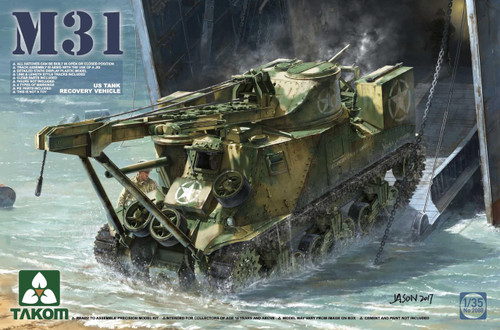