Bergerpanzer 38(t) was a recovery vehicle based on Hetzer’s base, with lower open-top superstructure, manufactured by BMM company in Prague. The plans were approved in September 1944 and called for production of 170 vehicles until the end of 1944. In fact just 101 vehicles were built. To meet the production plans it was decided to convert 64 summer production´s Hetzers into armoured recovery vehicles, but it is unknown how many were actually converted. Production was much slower than plans, and total number of about 180 vehicles was finished until the end of the war.
The Bergepanzer was equipped with two-ton folding jib crane used to handle engines and other heavy components. Additionally the recovery vehicle was equipped with five-ton winch of Baumgarten company. The winch was driven by the vehicle´s engine through transmission system. At the end a blade was installed at the rear of the hull, but it is again unclear how many vehicles were equipped with it. There were also some development works to install the blade at the front of the vehicle, as seen in the company blueprints, but probably these plans were never realized. 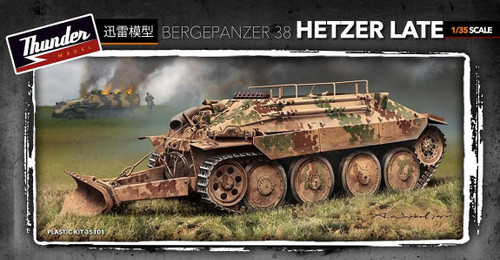