The SdKfz 7 was a half-track military vehicle used by the German Wehrmacht and Waffen-SS during the Second World War. Development of the SdKfz 7 can be traced back to a 1934 requirement for an eight-tonne half-track military vehicle. The vehicle first appeared in 1938 and was destined to be used mainly as the tractor for the 8.8 cm FlaK gun and the 15 cm sFH 18 150mm howitzer. The vehicle could carry gun crews of up to 12 men in theatre-type seats. The rear of the vehicle was an enclosed compartment for storage of ammunition. The tractor could tow loads up to 8,000 kg in weight. Most were fitted with a winch.
Item No    01514
Item Name    Sd.Kfz.7 Mittlere Zugkraftwagen 8t early version
Bar Code    9580208015149
Scale    1:35
Item Type    Static Armor
Model Brief    Length: 195.73mm Width: 68.6mm Height:67.71mm
Total Parts    848pcs
Photo Etched Parts    one sheet photo-etched parts
Total Sprues    17 sprues with further  one clear sprue, 3 rubber tyres and platform
Paint Schemes    Markings are provided for  vehicles in Panzer Grey and in Dark Yellow with Red Brown and Green camouflage scheme
Features: Chassis
-New tooled slide-moulded one-piece mudguard
-Both sides panels and top panel of the engine hood can be open to show the full 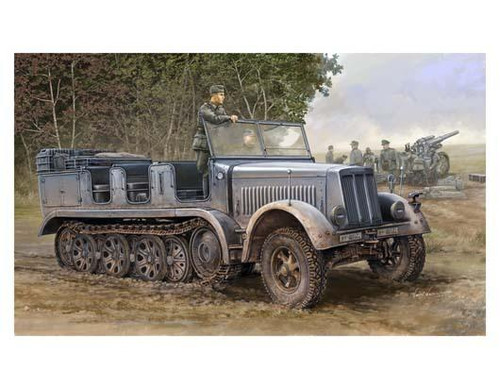