This is a resin detail parts set for use with military vehicle kits. The flak tower is a high-rise reinforced concrete air defense facility built by the German Air Force during World War II as an urban air defense facility to protect strategically important cities from Allied air raids. The flak tower consisted of a G tower with an anti-aircraft gun, and a command tower called the L tower, equipped with radar and an anti-aircraft command device. After the war, various equipment such as the armament was removed and the flak tower itself was dismantled and removed, but many of them still exist and are being diverted to various purposes. The flak tower that was built in April 1941 in Berlin was dubbed the Zoo Tower because of its location. This kit includes resin parts, 3D-printed parts, photo-etched parts and a metal barrel. 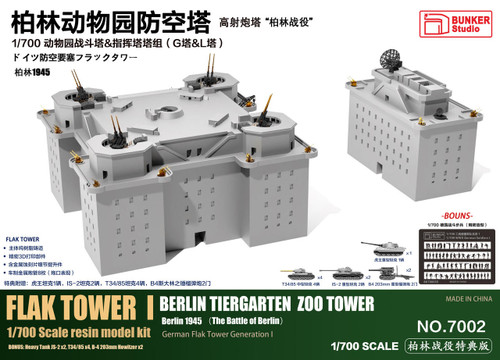