Dragon brings an attractive item allowing modelers to build either a P-61A or P-61B night-fighter as flown by the US Army Air Forces during WWII. The P-61 Black Widow, named after a North American spider, is significant because it was the first operational warplane designed from the outset to use a radar. The twin-boom fighter had a crew of three (pilot, gunner and radar operator), and it boasted four 20mm Hispano M2 cannons and four 12.7mm M2 Browning machine guns. The first of 706 production P-61s rolled off the production line in October 1943, and it remained in service till 1954.

There has been a considerable gap since either of Dragon's previous P-61 appeared on shop shelves. But now Dragon’s immensely practical 2-in-1 philosophy permits modelers to choose either one to build. ! All the characteristic elements necessary to assemble either of these Black Widow variants is included in the box. Detail levels are sharp, and the kit builds up into an accurate representation of this American night-fighter that flew in many different theaters of war in WWII. This will be another 2-in-1 hit from the Warbirds range. 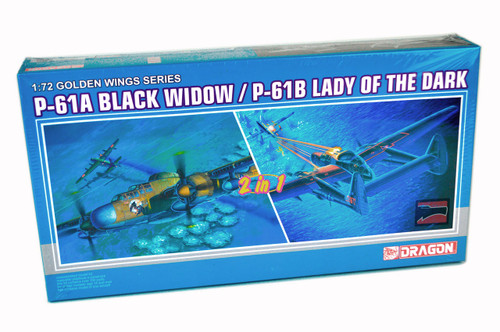