The lineage of VQ-1's "World Watchers" can be traced back to two PBY-5A Catalina "Black Cats" modified for electronic reconnaissance during World War II.

In Oct 1951, the unit was formally established as the Special Electronic Search Project (SESP) at NAS Sangley Point, Republic of the Philippines, in Oct 1951.

On 13 May 1953, the unit was redesignated Detachment Able of Airborne Early Warning Squadron One (VW-1), and operated four P4M-1Q Mercator aircraft.

On 1 Jun 1955, Detachment Able was reorganized into Electronic Countermeasures Squadron One (VQ-1) at MCAF Iwakuni, Japan. This was the first Navy squadron dedicated to electronic warfare.

In Sep 1956, VQ-1 received the first A3D/A-3 Skywarrior, or "Whale" as it came to be known, which served the squadron for the next three decades.

In 1960, VQ-1 moved to NAS Atsugi, Japan and redesignated Fleet Air Reconnaissance Squadron ONE. The last Mercator was retired and replaced by the WV-2Q Super Constellations. The "Willie Victor" would remain the backbone of VQ-1's long range, land-based reconnaissance efforts through the Vietnam Era and into the 1970s.

The squadron's involvement in the Vietnam War started characteristically, at the very beginning, when a Skywarrior crew was awarded the Navy Unit Commendation for their role in the Gulf of Tonkin incident of 2-5 Aug 1964. For the next nine years, VQ-1 would operate from DaNang, Cubi Point, Bangkok, aircraft carriers on patrol in Yankee Station and other bases in Southeast Asia. VQ-1's aircrews supported countless air strikes and were credited with assisting in the destruction of numerous MiG aircraft and Komar patrol boats.

In 1969, The first EP-3B joined the squadron, which began the replacement program for the Super Constellations, which was completed in 1974.

In 1991, the squadron closed its permanent detachment at Atsugi, after 30 years and relocated it to Misawa, Japan. In the same year, VQ-1 received the first EP-3E Aries II, an upgraded version of the ARIES I, using modified P-3C airframes. The squadron played a key role in Operations DESERT SHIELD and DESERT STORM. Tasking included strike support, combat search and rescue, communications and over-the-horizon-targeting support to Coalition forces.

In 1994, as a result of the base closure of NAS Agana, VQ-1 was notified of the homeport change to NAS Whidbey Island. Coincidentally, in Jul 1994, VQ-1 retired the Navy's oldest operational P-3, EP-3E ARIES I BuNo 148887. Its retirement also marked VQ-1's transition to all EP-3E ARIES II mission aircraft. The next aircraft upgrade, the Sensor Systems Improvement (SSIP) Program, became operational in Aug 2000.

On 1 Apr 2001, a VQ-1 EP-3E collided with a People's Republic of China F-8 II fighter, 70 nm off the coast of Hainan Island in the South China Sea. After struggling to regain control of the crippled aircraft, the crew performed a successful three-engine, no-flap emergency landing at Lingshui Air Base on Hainan Island. The crew of 24 was detained for ten days.

After the terrorist attacks of 11 Sep 2001, VQ-1 surged aircraft and crews to the Central Command, where missions were flown in support of Operations ENDURING FREEDOM, IRAQI FREEDOM and NEW DAWN.

On 17 May 2012, VQ-1 became the largest operational aviation squadron in the Navy when Fleet Air Reconnaissance Squadron Two (VQ-2) was officially disestablished and its personnel consolidated into VQ-1.

Today, VQ-1 continues to provide Intelligence, Surveillance, and Reconnaissance (ISR) flights over an area of responsibility spanning 17 time zones from the East Coast of Africa to the West Coast of the United States. The World Watchers maintain a constant, forward-deployed status to ensure global support to Combatant, Joint and Fleet Commanders.

This book is a tribute to all World Watchers who have served the squadron since its establishment to date. A special mention goes to those crews who were lost in tragic accidents, while serving their country. 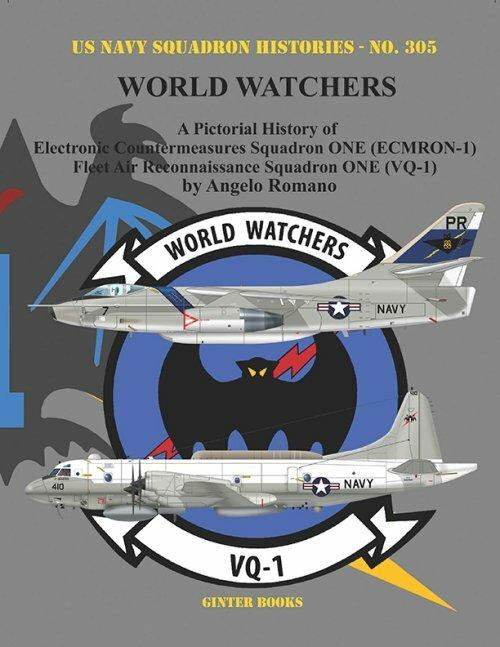