The  Saab 29 , colloquially called Flygande tunnan (English: "The Flying barrel") was a Swedish fighter designed and manufactured by Saab in the 1950s. It was Sweden's second turbojet-powered combat aircraft, the first being the Saab 21R. Despite its rotund appearance, the J 29 was fast and agile, serving effectively in both fighter and fighter-bomber roles into the 1970s.

J-29F Fighter, 308 aircraft converted from available stocks of B and E model airframes from 1954 to 1956; featured the afterburning Ghost and dog-tooth wing; all remaining aircraft were further modified in 1963 to carry a pair of US-designed AIM-9B Sidewinder heat-seeking air-to-air missiles, built by SAAB under license as the "Rb 24." 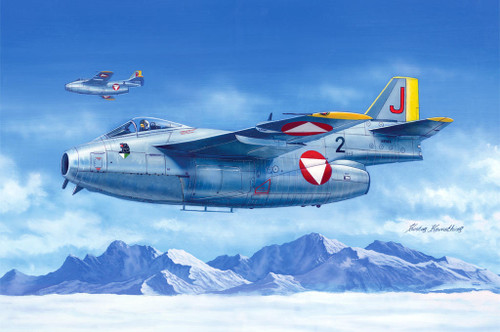