Officially licensed by the Department of the Navy. Look for the Official Navy Hologram on our Kit. This kit comes in at 1/136 Scale with 20 parts. The kit comes molded in Navy Blue with the clear part for the windshield. Upgraded decals and our Famous clear Swivel Stand. Wingspan Measures 14.5 inches when complete. Skill level 2. Great for a weekend build.

About Your P6M SeaMaster
The Glenn L. Martin Company, builder of the famous China Clipper, and well known for a line of successful seaplanes, designed and built the world's first multi-jet seaplane bomber, the P6M-1 SeaMaster, in the early 1950's. While the jet age was still in its infancy, this remarkable seaplane displayed several advanced features in addition to a flashing performance for such a large seaplane. The SeaMaster was developed for the Navy specifically for mine laying and photo reconnaissance duties, and was capable of operating from nearly any large body of water. To preserve the clean lines of it's sleek hull, the SeaMaster carried its weapons in a unique revolving bomb bay, which rotated to empty it's lethal cargo at high speed, yet retained a watertight seal in the hull when closed. The weapons were loaded through a hatch in the top of the fuselage while the plane rested in the water.
A crew of five operated the SeaMaster, which was armed only with a remotely-fired barbette of twin 20mm cannons in the tail, as its speed was equal to any interceptor likely to attack and the enemy could only approach from the rear. The first flight of this Advanced Patrol bomber took place in July 1955, at which time six YP6M-1 and twenty-four P6M-2 versions were ordered. However, just as production of the big flying boat was getting underway, the program was cut back and only eleven SeaMasters were completed. The last three were P6M-2's with bubble canopies and more powerful engines. 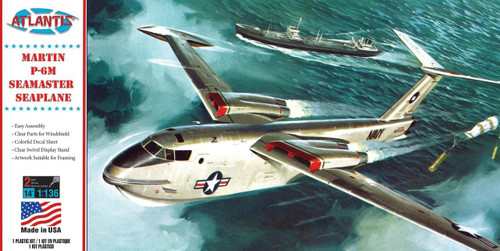