In the late 1950s, due to a significant breakthrough in the field of compact electronics, it became possible to install various types of equipment to conduct electronic reconnaissance in the air. One of the most famous aircraft for this purpose, which has been in active service for more than 60 years, is the Boeing RC-135, developed from the C-135 Stratolifter transport aircraft. During this long period, therehave been a number of changes in the reconnaissance equipment installed on the aircraft, and therefore it isprobably the main basis for new modifications, now consisting of 15 different types from the RC-135A to the RC-135W.

In 1973, six RC-135C aircraft were rebuilt to the new RC-135V standard. The new aircraft was distinguished from its predecessors by an unusually elongated nose, in which AN/AMQ-15 reconnaissance equipment was installed. The aircraft also had a large number of external antennas under the fuselage, above it, and at the rear.
Similarly, in the early 1980s, all RC-135M aircraft were redesigned to the RC-135W standard. The RC-135V and RC-135W were generally very similar in appearance to the earlier variants, and only a few slight differences in their external antennas distinguished them. Both versions were given the common proper name Rivet Joint and have been a major type of electronic reconnaissance aircraft in the United States Air Force for more than 40 years. Their main task is to identify the enemy’s air defenses, to locate and track sources of radio emission in all possible ranges, and to intercept communication between command posts and enemy aircraft.

To carry out these tasks, the aircraft crew includes a number of specialists in radio interception and surveillance of potential enemy objects on land, in the air and at sea. In addition, a special analytical group processes all the results obtained and every two minutes gives an informational summary of the intelligence results. In case of emergency, this time interval can be significantly reduced, up to one report every 10 seconds. The specialists also include two operators for the detection of non-standard signals and previously unknown radio sources, given the possibility of the enemy employing new technologies and techniques.

Aircraft of this type usually perform tasks paired with the E-3 AWACS long-range radar aircraft, transmitting to them all information collected during the flight through a special coded communication channel. The latest equipment installed on the RC-135V and RC-135W adds the ability to obtain additional information about enemy air targets from satellites in space.

Active use of the RC-135V and RC-135W began immediately after their adoption in the 1970s and continues to this day. Apart from the US Air Force, aircraft of this type are also operated by the Royal Air Force of the United Kingdom. 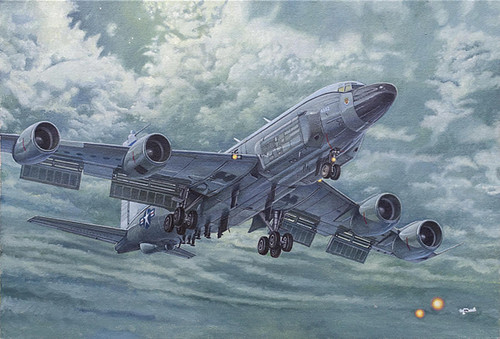