Some interesting facts about your Convair Space Shuttle Craft: On the box it says Transports personnel between earth and space satellite!

Please remember that this was written in 1959 before any satellites were sent into space.

When the first Earth satellites are established they will be relatively small. For this reason, it will be necessary to replenish supplies and change personnel at frequent intervals, and it is for this purpose that Krafft Ehricke designed this spacecraft. Krafft Ehricke is assistant to the Technical Director of the Astronautics Division of Convair. He was born in Germany in 1917 and after a formal education that led to various degrees in engineering, he became active in the German rocket program. With the defeat of Germany in World War II, Mr. Ehricke along with many other top missile specialists, came to the United States and continued the work in the field of missile and space research. He became a United States citizen in 1954. The Shuttle Craft has an overall height of 130 ft, a main stage diameter of 20 ft, and a wingspan of about 51 ft. The fins on the main stage spread nearly 60 ft.

Soaring upward on the first leg of its journey to an orbital satellite, the Shuttle Craft would be boosted by powerful liquid fueled engines. At appropriate times, the first and second stages would be dropped off, leaving the third, or winged passenger stage, to intercept the orbiting satellite. The third stage carries a pilot and four passengers, and after transferring the cargo to the satellite, and picking up the return trip crew, returns to earth. Designed to withstand the tremendous heat of re-entry into the Earth's atmosphere, the third stage will be constructed of special heat resistant material and will re-enter the atmosphere as a glider. The rocket engines will probably be used in the final stages of landing approach, and it is expected that the landing speed will be about the same as a present-day jet airliner. 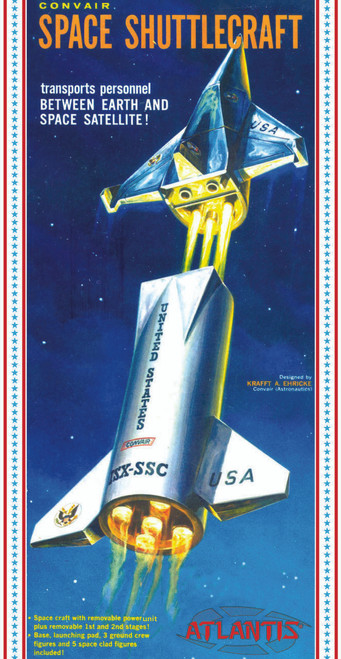