In 1917, Guy Otis Brewster, an American gunsmith from New Jersey, created a set of wearable armor to protect soldiers from small arms fire, which went down in history under the name “Brewster Armor”. This kit included a large shield-shaped body plate and a heavy helmet. The armor plate for the body was fastened with shoulder buckles, and it also had some kind of damper cushioning. The helmet was equipped with adjustable eye shields. The thickness of the armor was 5.5 mm (0.21 inches), and, according to Brewster’s idea, it was supposed to reliably protect the soldier from the effects of small arms.

In April 1917, this unusual protection was tested, and the inventor himself tested it on himself. Initially, the armor was struck with a sledgehammer, and then Brewster stood in front of the machine gun, and several bullets were fired at him. The tests were successful, and Brewster himself stated that the impact of machine gun fire is only a tenth of the shock that he experienced when hit with a sledgehammer.

Despite this, Brewster’s Armor had a significant drawback – it was heavy and severely fettered the soldiers in their movements. Perhaps that is why history has not recorded cases of the massive use of this armor protection on the battlefields. 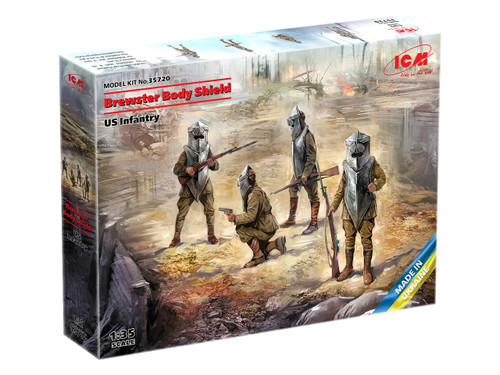