In the late 1920s, many leading American companies began to invest heavily in the Weimar-era German economy. Many industries, including the automotive industry, had significant industrial potential as the country emerged from its economic crisis. Germany, as the birthplace of the automobile, had always been one of the innovators in fashion and new technology in car production, but at that time the country was in significant financial difficulties and needed significant investment.

Henry Ford, the father of the automotive industry in the United States, had great ambitions to expand sales of his model line in Europe amid oversaturation of Ford's home market. In 1928, a cooperation agreement was signed between Ford and the leaders of the state of Rhine-Westphalia, and two years later in the presence of Henry Ford and the mayor of Cologne Konrad Adenauer, the grand opening ceremony of the new car and truck manufacturing plant took place. Ford’s company had supplied a quantity of critical equipment to unify cars built in the United States and the subsidiary in Germany.

German-made cars were very similar to their American cousins, differing only in minor details such as small exterior features. After the Nazis came to power, led by Hitler, cooperation between the United States and Germany did not stop but increased as the new government set a course for gradual remilitarization, and, consequently, for an increase in the number of vehicles in the newly formed army. The Ford concern transferred more and more developments to its established enterprise in Germany.

With the beginning of World War II, a significant number of cars, including private ones, were requisitioned for the army. This fate befell the G81A, which from the first months of the war was used as a light staff vehicle by Wehrmacht, Luftwaffe and police units. This car was used mainly in the first years of the war and at the beginning of Germany's Eastern Campaign, because in off-road conditions and the USSR's winter mud, its use was significantly limited.

Vehicles operated in European countries, which had a developed network of roads of a better standard, lasted much longer, and some cars of this type were in use as late as 1943. In Germany, G81A police cars were used almost until the end of the war.

The redevelopment of Ford's plants, which had long since been nationalized by the Nazi regime to produce only trucks, needed by the army in large quantities, resulted in a lack of spare parts for many types of cars, so in 1944 cars of this type were the exception rather than the rule. Although their contribution to the war was relatively minor, they were often found in military units, and still played their part. 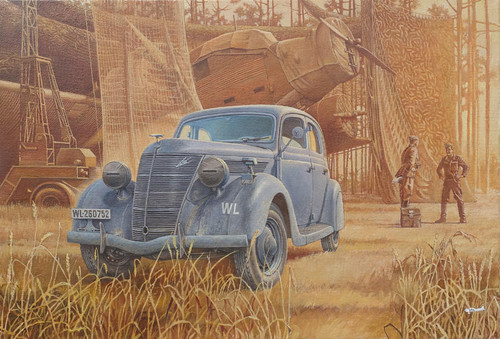