The Bell P-39 Airacobra is one of the more discussed fighters of WW2. This is in part because of its’ many different iterations and that it was one of the first to see actual combat use. There were many changes from the P-39C to the P-39Q, most of them were actual improvements.

Employment by the USAAF was early in the war, before we had learned how to deal with the hard demands of Aerial combat, and before we had many well trained

or experienced pilots. There was only one American pilot who became an ace flying the P-39. Our early efforts in the Pacific cost us dearly in lives and machines. Our P-39 units only managed about a 1:1 kill ratio against the Japanese. P-39’s were replaced as soon as we could manage by P-40, P-38, and P-47 fighters.

The P-39 was a unique design, it was fairly fast, around 360 mph, and quite maneuverable. It could not reach 400 mph or extreme altitudes, but it did not tumble or fall out of the sky. The key element of it’s armament was it’s Cannon firing through the propeller hub. The key airframe element was the centrally mounted engine, sitting on the center of gravity. This allowed the airplane to maneuver in any direction without a huge mass of engine in the nose that had to be pointed and followed by the airplane. This made the airplane “twitchy”, meaning it would depart from straight and level at the slightest urging of the pilot. A good pilot who understood the airplane could dogfight with anything, Chuck Yeager flew the P-39 in advanced training and said it was the best pure dogfighter he ever flew.

Now the famous 37mm cannon. The USAAF knew they would need a powerful weapon to effectively destroy enemy bombers. The warhead of the shell weighed about 1.5 lbs, which is a lot of explosive and steel when it explodes in an aluminum aircraft loaded with tons of gasoline and other nasty flammables. So it would not require many hits on any aircraft. Average time on target was only a few seconds so efficient firepower was critical.

The Russians who were provided with thousands of P-39’s did not use them to “bust tanks”. For one thing the AP round for the cannon could only penetrate about .8” of armor, which was considered good at the beginning of WW2, as most tanks had fairly thin armor. The U.S. sent Russia 1.2 million rounds of HE, not armor piercing ammunition.

Russia made a careful evaluation of the P-39 before placing it in service. They usually removed the four .30 cal. “paint scraper” wing guns to save weight and improve roll rate. Like the Germans they felt one good cannon and two heavy machine guns was quite adequate. They did very well in combat against all German aircraft. One Russian wing had a dozen aces with 15 or more kills. It’s worth noting that Russia accounted for 40% of German aircraft losses in WW2.

Russian faith in the P-39 is well defined in Eddie Rickenbackers’ autobiography.

1 × 37 mm M4 cannon in nose (firing through the propeller hub) with 30 rounds of HE-T ammunition. 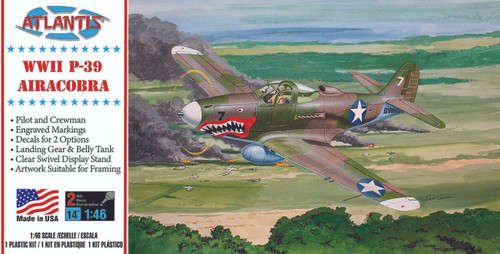