The Republic P-43 Lancer was a single-engine, all-metal, low-wing monoplane fighter aircraft built by Republic, first delivered to the United States Army Air Corps in 1940. A proposed development was the P-44 Rocket. While not a particularly outstanding fighter, the P-43A had a very good high-altitude performance coupled with an effective oxygen system. Fast and well-armed with excellent long-range capabilities, until the arrival of the Lockheed P-38 Lightning, the Lancer was the only American fighter capable of catching a Japanese Mitsubishi Ki-46 "Dinah" reconnaissance plane at the speeds and heights at which they flew. In addition, the P-43 flew many long-range, high-altitude photo recon missions until replaced by F-4/F-5 Lightnings (P-38 variants) in both the USAAF and RAAF.

Republic-43A-1 - Version for China, rudimentary armor and wing fuel tank protection, armed with four 0.50 in machine guns in the wings, centerline hardpoint for a drop tank or up to 200 lb (91 kg) of bombs; 125 built. 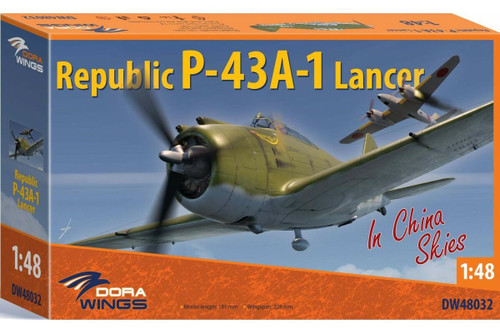