In June 1954, the Council of Ministers of the USSR adopted a resolution on the creation of a special design bureau for the development of powerful military tractors with the possibility of subsequent modification in the civilian industry. At the Minsk Automobile Plant, a Special Design Bureau [SKB] was organized, under the direction of the chief designer Boris L. Shaposhnik, and an effort was made to develop an improved heavy tractor based on the proven MAZ-535. At the end of 1958, the first prototypes appeared, which successfully withstood factory, and then state interdepartmental tests. On March 29, 1959, the first truck MAZ-537 was assembled at the Minsk Automobile Plant, and from the beginning of 1960 began serial production of new MAZ-537 wheeled tractors, which were adopted for service on July 30, 1962. At the end of 1963, design documentation was transferred to the Uralselmash plant in the city of Kurgan (renamed the Kurgan Wheel Tractor Plant (KZKT) by the order of the Minister of Automotive and Tractor Industry of June 11, 1966), where the MAZ-535 family had been manufactured. At that time, the total output of MAZ-537 family tractors in Minsk and MAZ-535 in Kurgan reached 350-400 pieces per year.

The MAZ-537 is powered by a standard 525 hp tank engine tucked behind a forward control cab that provides seating for the driver and three passengers. The simple & reliable design is largely based on the MAZ-535B tractor. The MAZ-537 differs in a sturdier frame with an increased wheel base and features a more powerful engine, with modifications to the cooling and lubrication systems, fuel and air supply, and the exhausts. The engine preheater was moved under the cab to the frame, and its outlet extension was shortened and withdrawn through the front frame. The suspension design remains virtually unchanged, but the front wheel torsion struts were enlarged in both length and diameter, and the brake system was thoroughly improved. In comparison with the predecessor, the compressor drive installed on the overdrive was changed - to be powered by two belts making it simpler and more technologically efficient. The new tractor did not have a winch and a power take-off box, which was later installed on its modifications.

The MAZ-537 tank transporter can tow semi-trailers with medium and main battle tanks with a maximum weight of 50,000 kg both on roads and rugged terrain. It is still capable of towing any MBT currently in service with the Russian Army today. The reliable MAZ 537 "Hurricane" was widely used by the regular troops for the transportation of various long-range combat systems and has been exported to serve in the armed forces of many countries. For the creation of the MAZ-535 and MAZ-537 tractor families, chief designer of the SKB MAZ Boris L. Shaposhnik and a group of his associates were awarded the State Prize of the USSR in 1968. 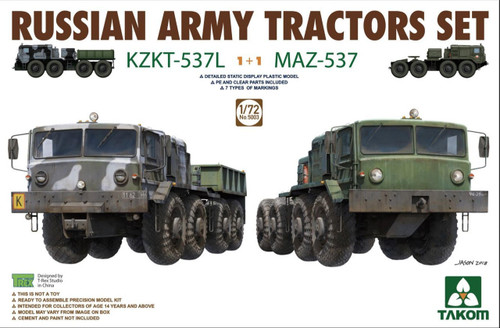