ABOUT THE PHANTOM OF THE OPERA

Audiences gasped and shuddered to their heart's delight while viewing
the original horror movie, "The Phantom of the Opera." First released in
1925 as a silent film, it starred Lon Chaney, dubbed "The Man of a Thousand
Faces," because of his theatrical bag of tricks he employed to completely
alter his features. In this movie classic, he succeeded through countless
devices in transforming his face to take on the appearance of a skull. To
further enhance the drama, the gruesome face of the Phantom was cloaked
in secrecy; no still photos were allowed to be published until well after the
release of the film. In fact, it is not until the fifth reel that he was seen
unmasked.

The bizarre plot revolves around an insane musician seeking revenge for
his disfigured features by menacing the Paris Opera House, played so eloquently
by Chaney that it fairly frightened the public out of its wits!

The Paris Opera House of 1880 was thrown into a series of turmoils by
strange events attributed by the invasion of evil spirits...actually created by
the mysterious Phantom. His main ambition was to train a beautiful young
opera singer to achieve the honor of Prima Donna; thus he left the subterranean
quarters where he made his home to launch a reign of terror. Maintaining
his horrible secret, he continued his horrendous acts by killing in unique,
violent methods, climaxing his mad rampage by causing a massive chandelier
to crash upon an unsuspecting audience. Exercising a spell over his protege,
he hypnotized the soprano into following him into the catacombs under the
opera house where, to her utter terror, he tore off his mask!

The lover of the captive singer, falling prey to the Phantom in his efforts
to rescue her, was forced to endure the torture chamber before being saved
by an agent of the secret police. The Phantom, in the meantime, made good
his escape amidst the confusion. In a spine-tingling chase, the furious mob
captured the fleeing villain who suffered as violent a death as his victim. 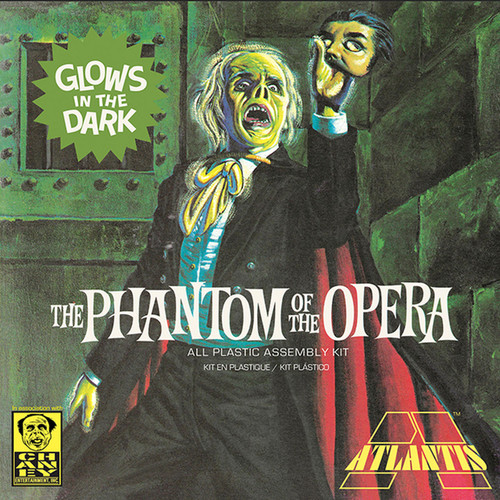