History of Your Consolidated B-24J Liberator

Among the truly great aircraft of World War II, few acheived the status of the famous B-24 Liberator. This aircraft participated in most of the mass raids in Europe, and when the scene shifted to the Pacific Theater, they were on hand to carry the war to the Japanese homeland. This durable heavy bomber was seen in all fighting zones in a variety of roles, ranging from bomber, transport, and tanker to photo reconnaissance and trainer. These 4 engine giants established new distance records and were the most widely used heavy bombers in the war.
Of the 18,188 Liberators produced for the US Army, 6,678 were B-24Js. The J variant received a modified, hydraulically powered nose turret and improved autopilot, and bombsight. They had a wingspan of 110 feet; length was 67 feet 2 inches; and they stood 18 feet high. Powered by 4 Pratt & Whitney R-1830-65 fourteen cylinder engines, they had a top speed potential of 300 mph and a service ceiling of 28,000 feet. Maximum bomb load was 12,800 pounds. The crew varied from 8 to 10 men and the B-24J carried ten .50 caliber machine guns for protection. 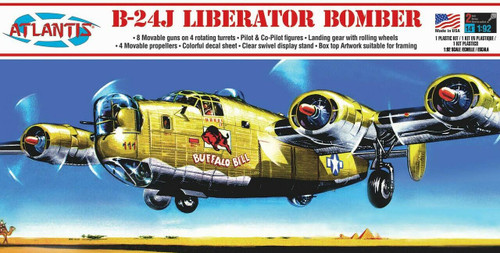