HMS Exeter was the second and last York-class heavy cruiser built for the British Royal Navy during the late 1920s. During World War II she was assigned to patrol South American waters against German raiders. Exeter was one of three British cruisers that fought the German Admiral Graf Spee, in the Battle of the River Plate. She was severely damaged during the battle and sent for repairs.
She then spent most of 1941 on convoy escort before she was transferred to the Far East after the start of the Pacific War in December. In 1942, she was assigned to the Striking Force of the joint American-British-Dutch-Australian Command (ABDACOM. During the Battle of the Java Sea the Exeter was crippled and withdrew. She was intercepted and sunk by Japanese ships at the beginning of March in the Second Battle of the Java Sea.
Length: 250.4mm Beam: 25mm
- Hull made from multi-directional slide molds.
-Deck wood pattern finely rendered
-Contains engraved name plate & display stand
-Photo-Etched parts included
- Two MK1 planes 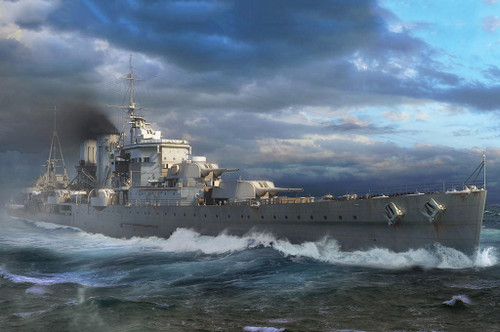