Classic Warships gives us the USS Independence CVL-22 , this time Steve Wiper introduces us to a new format with his books and just like the new P-40 Warhawk book, he gives us colorized pictures and ship profiles on the inside of both covers, front and back.  This is the first time that this format has been offered in any pictorial 8.5" x 11" formatted book.

The USS Independence was the first of a new class of such converted carriers, and its first combat operations in WWII took place with a raid against Marcus and Wake Islands in the Pacific.  Later in 1943, the carrier took part in campaigns against the Gilbert Islands and Tarawa, during which it was hit by a Japanese air-launched torpedo.  The 14,751-ton combat-loaded carrier was a pioneer in night operations, and it proceeded to fight in the Philippines, the Battle of Leyte Gulf and Okinawa.

After the war, USS Independence was used as a target for Bikini Atoll atomic bomb tests in 1946, before the radioactive hull was eventually sunk near the San Francisco coast. This important light aircraft carrier is available as a "Smart Kit in 1/350 scale from Dragon Models.

This very handy reference pictorial book is loaded with 81 black and white, and 3 colorized photographs of the Cleveland class cruiser converted to a light aircraft carrier; also a very nice color profile of the Independence is included from Dragon Models.

This book is loaded with full page photographs which give the reader a walk-a-round perspective of the USS Independence.  There are many never before published photos which were obtained from the US National Archives, and from individual private collectors. 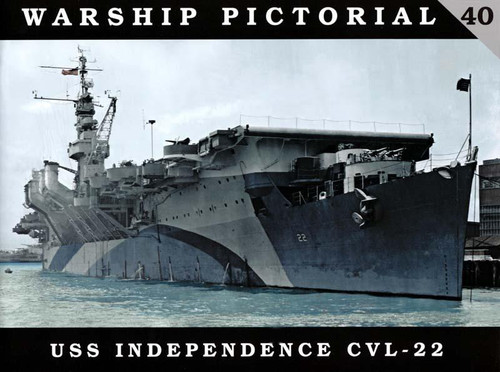