Steve Wiper of Classic Warships has released another book in a series of aircraft pictorial books, this time he brings us the F-4B/N Phantom II Aircraft Pictorial number 6.  Author Pete Clayton, CDR USN (Ret) is one of the leading authorities on his long serving US Navy aircraft carrier and a major photographer and contributor to the US Navy Tailhook Association Newsletter.  He has put together a history of the McDonnell F-4B and F-4N Phantom II Fleet Phantom Squadrons.  Covered are the histories of the development aircraft, and the production F-4H-1 Phantoms from VF-74 when they completed carrier qualifications.  The F-4H-1 later became the F-4B.  Did you know Phantoms aboard the Coral Sea wore special stripes during the Iran Hostage Rescue?  You will find never before published photographs showing those special marking in this book.

Plus this book includes photographs and descriptions of the Marine Corps F-4B's. 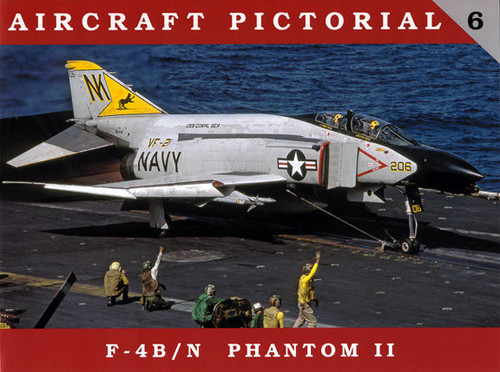