The US Navy's first purpose-built carrier jet fighter was the McDonnell FD-1/FH-1 Phantom, first ordered in January 1943. The small elegant aircraft had a long gestation period due to the delay in development of its Westinghouse jet engines. Originally six and even eight small 300 lb thrust engines buried in the wing were considered as powerplants, before two 1,600 lb thrust engines were settled on. These were mounted just outside of the wing roots and allowed conventional flaps and ailerons of any size to be utilized on the wing. It was fitted with tri-cycle landing gear, tailhook, and catapult equipment. The 500 mph aircraft first flew in 1946, and two XFD-1 protoypes were built along with 60 FD-1/FH-1 production Aircraft with half the FH-1s going to Navy carrier squadron VF-17A/VF-171 and half to Marine squadron VMF-122. The Navy operated its full squadron operationally aboard the USS Saipan (CVL-48) and the USS Franklin D. Roosevelt (CVB-42) proving the feasibility of jets and carriers. The Marines fielded a FH-1 Flight Demonstration Team, "The Flying Leathernecks" too. The FH-1 had no vices in the air and with new engines the Phantom was re-engineered into the larger and very successful Korean War carrier fighter, the F2H Banshee. The Phantoms were relegated to the reserves from 1950 through 1954 before being removed from service. 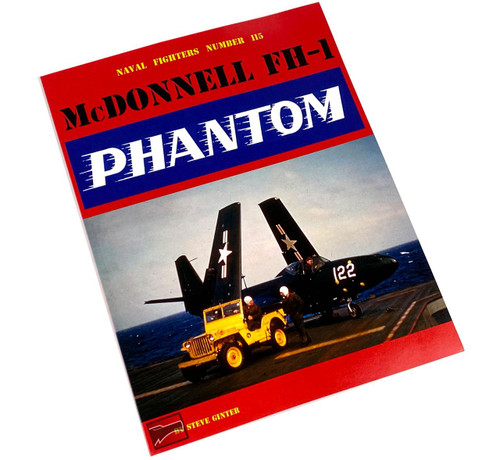