Marder III AusfM Tank Destroyer SdKfz138 -LateThe last Marder Ill variant was based on the Geschiitzwagen 38t Aust M, a purpose-designed vehicle for self-propelled gun use, again armed with the 75 mm PaK 40 anti-tank gun. Aust M was the final variant of the Marder series and was a significant improvement over previous models, with its lower silhouette, sloped armor and much more functional fighting compartment. In this variant, the engine was moved from the rear to the middle between driver and the rest of the crew. Because there was no engine in the rear, the gun and the crew did not have to sit on top of the engine deck as in previous models. The fighting compartment could be lowered down to the bottom floor level where the engine used to be, which decreased crew exposure, as well as visibility. Unlike the previous two Marder Ills, the fighting compartment was closed at the rear, protecting the crew up to their midsection It stayed open-topped It could carry only 27 rounds of ammunition. The machinegun port at the front was eliminated in the Ausf M in favor of an MG 34 or MG 42 carried by the crew. 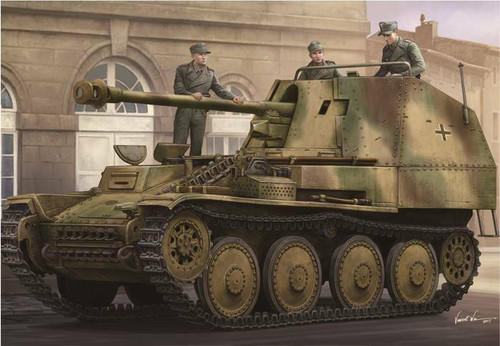