HobbyBoss
1/200 USS PHM of Pegasus Class
The Pegasus-class hydrofoils were a series of fast attack patrol boats employed by the US Navy. They were in service from 1977 through 1993. These hydrofoils carried the designation PHM for Patrol, Hydrofoil, Missile. The Pegasus class vessels were originally intended for NATO operations in the North Sea and Baltic Sea. Subsequently, participation by other NATO navies, including Germany and Italy, ceased and the US Navy proceeded to procure six PHMs, which were highly successful in conducting coastal operations, such as narcotics interdiction and coastal patrol, in the Caribbean basin.
Kit Includes:
Lower hull & superstructure made from multi-directional slide molds.
Contains display stand and engraved name plate
Photo etched parts 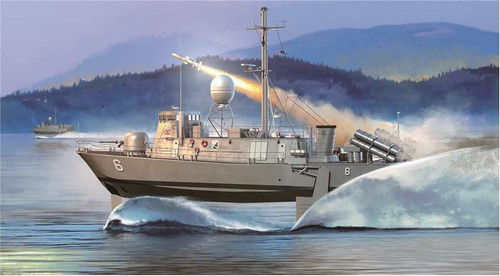