The S-300 (NATO reporting name SA-10 Grumble) is a series of Russian long range surface-to-air missile systems produced by NPO Almaz, based on the initial S-300P version. The S-300 system was developed to defend against aircraft and cruise missiles for the Soviet Air Defense Forces. Subsequent variations were developed to intercept ballistic missiles.

The S-300 system was first deployed by the Soviet Union in 1979, designed for the air defense of large industrial and administrative facilities, military bases, and control of airspace against enemy strike aircraft. The system is fully automated, though manual observation and operation are also possible.

The S-300PS/S-300PM (NATO reporting name SA-10D/E) was introduced in 1985 and is the only version thought to have been fitted with a nuclear warhead. This model saw the introduction of the modern TEL and mobile radar and command-post vehicles that were all based on the MAZ-7910 8×8 truck. This model also featured the new 5V55R missiles which increased maximum engagement range to 90 km and introduced a terminal semi-active radar homing (SARH) guidance mode. The surveillance radar of these systems was designated 30N6. Also introduced with this version was the distinction between self-propelled and towed TELs. The towed TEL is designated 5P85T. Mobile TELs were the 5P85S and 5P85D. The 5P85D was a "slave" TEL, being controlled by a 5P85S "master" TEL. The "master" TEL is identifiable thanks to the large equipment container behind the cabin; in the "slave" TEL this area is not enclosed and is used for cable or spare tire storage. 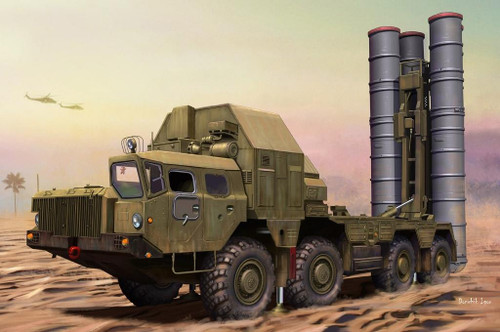