German PzKpfwl AusfF VK 1801 - The Panzer I was a stop-gap design introduced in 1934 for training tank crews As the tank was developed while Germany still officially adhered to the Versailles Treaty, it was initially covertly developed as Kleintraktor and then Landwirtschaftlicher Schlepper The LaS eventually became the Panzer I Its designed borrowed from the British Carden Loyd tankette and was intended as a training platform for industry and Panzertruppen alike As a result, it was undergunned, with just a pair of 792mm MG 13 machine guns in a rotating turret, and underarmored, with a steel plate 13 mm at its thickest Despite the intention to use it as a training tank, Panzer I was deployed in direct combat, first with the Nationalists in the Spanish Civil War 1936-1939 and then during World War II 1939-1941, contributing to the early victories of Nazi GermanyBy 1943, the Panzers were obviously obsolete However, a number of attempts to keep them competitive were made The VK 1801 was barely related to the original and represented a tentative Ausf F variant, with 80mm of frontal armor, a revised turret with paired MG 34s, and weighing over 18 tons, powered by a 150 HP Maybach HL45 Otto engine Stretching the definition of a light tank, the VK was supposed to be a light infantry support tank Out of the thirty built, eight were assigned to the 1 Panzer division and lost during the battle of Kursk, while the remainder was distributed among units and used for a variety of purposes, from training to police duties 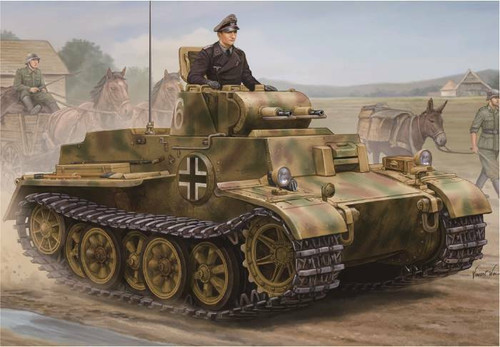