As early as 1980, the Soviet military started to seek a special armored vehicle which could be used in operations by special forces. In 2010, Russia restarted this project and named it Typhoon. A number of well-known Russian automobile manufacturers were involved in the Typhoon project. Among them, Kamaz developed a light four-wheeled armored vehicle for airborne troops, the K-4386 Typhoon-VDV. The K-4386 has a turret equipped with a 30mm 2A42 autocannon, which makes its firepower stand out from its counterparts.

This VS-014 Russian K-4386 Typhoon-VDV Armored Vehicle model kit features movable suspension and steerable front axles. Doors can be built in the open or closed position. Interiors of the cab, the passenger compartment and the turret control system are included. Clear lights, bullet-proof windshield and observation window parts are provided. Precision PE parts are included. 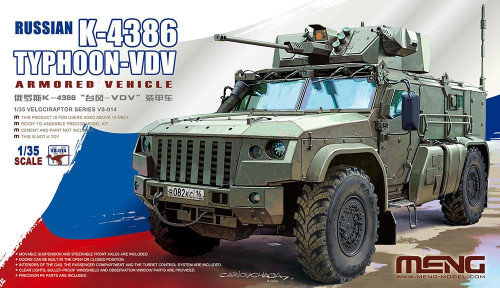