This full-color facsimile reprint of the actual JOLLY ROGERS war book appears here in a new quality edition. (The following is from the original dust jacket). No group of fliers since the Flying Tigers of China has ever emerged from the war with greater glory than the world famous Liberator unit . . . the JOLLY ROGERS. Month after month, since September, 1942, American newspapers and magazines have brimmed over with colorful stories about this most colorful of all B-24 outfits. Less celebrated Liberator units have complained that all these laurels fell to the JOLLY ROGERS because of their fascinating name and twin-tail insignia - a huge skull surmounting two crossed bombs. But the history of the JOLLY ROGERS tells its own story. No single heavy bomber unit in the Air Corps has ever claimed to beat the record of the JOLLY ROGERS in the number of enemy attackers shot out of the skies. Their bombing record has been acclaimed by the Men who ought to know . . . the men with stars on their shoulders in the Southwest Pacific. In this book you will find the faces of the men who were and still are the JOLLY ROGERS. Many of these have left the unit to return to the United States. Many have left, never to return. But all - cooks and clerks, fliers and ground crews - have earned their right to the page of American history which the JOLLY ROGERS have written with bombs and bullets. But more - the Editors of this book have tried to capture the flavor of life in the Southwest Pacific. No book about any Air Corps unit could ever be complete without the laughter, the irritation, the discomfort, the natives . . . the backdrop against which the greatest of all human dramas was played. It is with a sense of deep reverence and humility that this book is dedicated to the men whom no book could ever honor sufficiently . . . the men of the JOLLY ROGERS who died for their country. 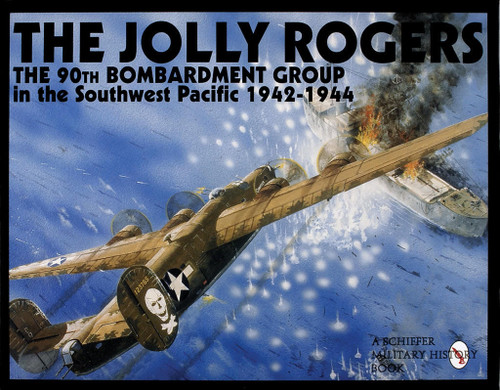