A Visual History of the U.S. Army's WWII Tank Destroyer In late 1941 the concept of a separate tank destroyer force began to jell. This force would be armed with specialized weapons. While the armys primary antitank weapons of the late 1930s were 37mm towed anti-tank guns, these were soon deemed to be inadequate against enemy armor. Accordingly, the quest for larger weapons began, as did the desire for a self-propelled antitank gun, or Gun Motor Carriage. The initial efforts, which involved adapting 3/4-ton, Dodge trucks to mount antitank weapons (the M6, née WC-55), which were intended as interim and training vehicles. In the same manner, half-tracks were fitted with cannon, yielding the M3 75mm Gun Motor Carriage. But, the quest was on to create a specialized and ideal tank destroyer, utilizing a tank chassis as the basis. By January of 1942 a prototype was in the works to mount the weapon in an open topped turret on the chassis of the twin GM Diesel-powered M4A2 Sherman Medium tank. After some months of development a design was finalized for a vehicle sharing the suspension, lower hull, and engine with the M4A2 but with an upper hull made up from thinner, but sloping, armored plate. Initially designated T35E1, when the design was standardized it was redesignated M10. In addition to the 5,200-plus Diesel-powered M10 tank destroyers, a further 1,700+ M10A1 vehicles were built, these being driven by Ford GAA gasoline engines. While the 3-inch weapon of the M10 was superior to that found on earlier U.S. tank destroyers, it was inadequate against the ever-increasing weight of German armor. The British addressed this by rearming 1,017 of the 1,648 M10s that they received with the superb Ordnance Quick Firing 17-pounder antitank gun. These vehicles were designated by the British as 17-pdr. SP M10 Mark IC/IIC, commonly referred to as the Achilles. Photo coverage includes plentiful period shots and copious amounts of detail photos of the M10, M10A1 and Achilles. One hundred twenty-eight pages. ISBN: 978-1-944367-19-0. By David Doyle 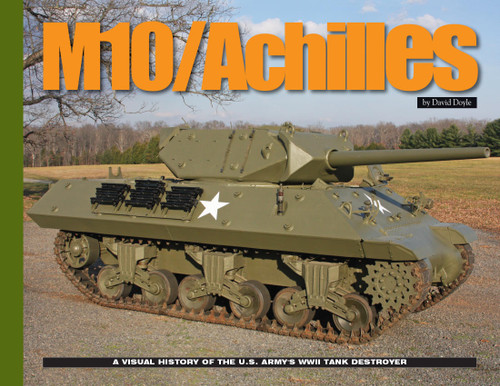