This Tamiya large-scale plastic model recreates the Tyrrell P34. Arguably the most radical design ever to compete in Formula 1, the Tyrrell P34 caused a sensation when it was revealed to the public. The car's designer, Derek Gardner, wanted to reduce drag by making the frontal area smaller, so instead of two normal-sized tires he used four small diameter tires that could be steered together. This also meant that the tires would be shrouded by the nose, further reducing drag. Making its debut at the 1976 Spanish GP, the car proved to be competitive, and it reached the pinnacle of its success with drivers Jody Scheckter and Patrick Depailler finishing 1st and 2nd respectively at the Swedish GP. 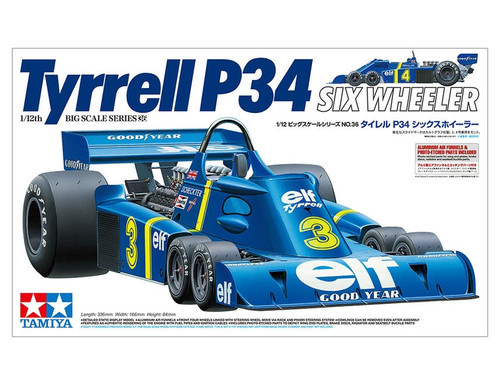