The F-14A Tomcat is still one of the most efficient fighter-bombers in the world. Since its first flight in 1970, the F-14 underwent various improvements. Tamiya provides an updated version of its famous 1/32 scale replica of this big cat. New parts have been designed to replicate every antenna and sensor that has been fitted on the actual plane. You will also find parts to load your model with the latest weapons such as the GBU-16 and GBU-24 laser guided bombs as well as a AN/AAQ-14 targeting pod.


About the model
Fighter-Bomber Grumman F-14A Tomcat plastic assembly kit.
1/32 Scale Overall length: 598mm, Overall width: 612mm.
The form of the aircraft has been accurately rendered.
Kit employs metallic parts and screws to make the wing movable.
A full range of armament including Phoenix missiles, GBU-16 and GBU-24 laser guided bombs are provided as well as a AN/AAQ-14 LANTIRN targeting pod.
Includes 3 figures, 2 pilots and a catapult officer, and decals for 5 aircraft. 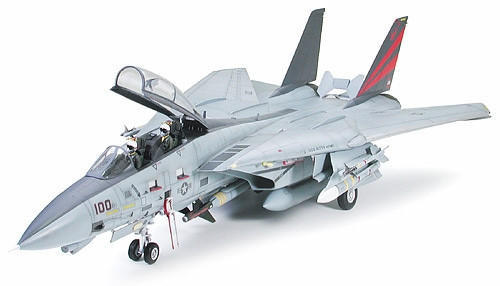