The P-51D Mustang is considered by many to be the best fighter aircraft of WWII. It incorporated advanced features such as a laminar flow wing and an efficient radiator design. Powered by the Packard-built Rolls-Royce Merlin V-1650 engine, it demonstrated superior performance and is widely considered to be the definitive variant of the Mustang. They were used to escort bombers such as B-17s and B-24s all the way to Germany and helped the Allies gain air superiority over Europe. Tamiya has reproduced this famous aircraft with utmost accuracy for addition to the 1/32 Scale Aircraft Series. The unmistakable form of the P-51D is accurately reproduced based on actual design drawings of the aircraft as well as thorough study of actual examples. Line it up with Tamiya's 1/32 scale Supermarine Spitfires and A6M Zeroes for a display of iconic WWII fighters.

1/32 scale plastic assembly kit of the P-51D Mustang. ★Overall Length: 308mm, Overall Width: 354mm. ★Famous form of the aircraft including its distinctive wing profiles have been precisely reproduced. ★Radiator components are reproduced just like those on the actual aircraft. Both the radiator flap and oil cooler flap are movable. ★You can select either early- or late-type tails, with the latter featuring the dorsal fin. ★Parts for 75- and 108-gallon drop tanks are included. ★Comes with 3 kinds of markings to depict aircraft from the U.S. 8th Air Force. ★A 16 page full-color photographic reference manual is also included. 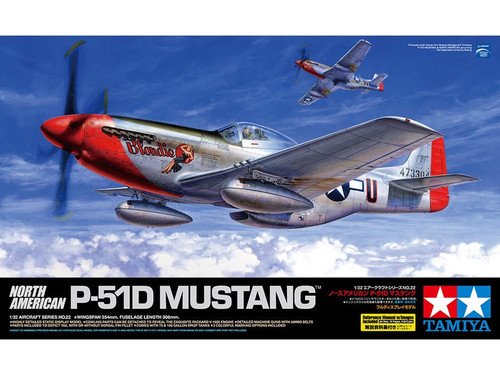