In 1941, after the German attack on Russia, it became clear to the UNITED STATES that possibility of an American involvement in the war was becoming more and more inevitable. For this reason, President Roosevelt ordered substantial production increases of the medium tank M4. The tank was not a completely new model, since it derived from the previous model M3 “Grant”. The Sherman had some major improvements on the superstructure and on the armament as well as on the welded or cast hull. The “General Sherman”, under which name the new tank was soon to be known, was equipped with a 75 mm gun, which was, however, insufficient against the German Tanks. This necessitated a series of changes, including a completely new turret as well as a 76 mm gun, which would be more efficient than the previous one. The new prototype was given the designation M4 A1. In January 1944, the new type was introduced. Until the end of the war, about 3400 pieces were produced. Notwithstanding the improvements, there were still many defects, one of them being the lack of protection. Frequently the crew was forced to protect the tank sides and the front with sandbags. In some instances the most exposed track sections were covered and sometimes even cement or steel blocks were attached. Tanks to its numerical superiority, the tank was able to match the German tanks, using its great maneouverability and its excellent 76 mm gun. M4 A1 took part in the invasion of Normandy and in all European theatres. 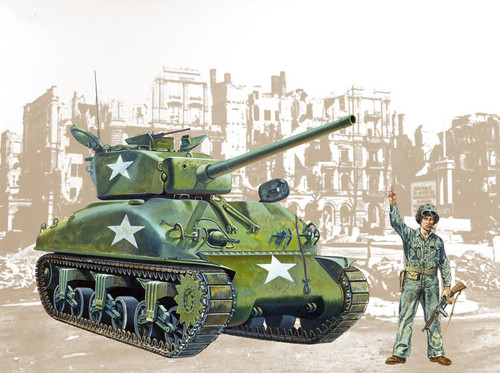