In the summer of 1941, Germany's invasion of Russia was unfolding favorably for the Wehrmacht. However, German authorities began to notice the inferiority of their tanks and anti-tank weaponry to those of the Soviet army, such as the T34. To cope with this disparity they decided to: improve the Pz.Kpfw.III and Pz.Kpfw.IV tanks; develop new tanks; and increase production of the 7.5cm anti-tank cannon. Finally, as an interim solution, it was decided to improved captured Russian 7.62cm anti-tank cannons and deploy them for Wehrmacht use. These fearsome cannons could penetrate 83mm armor plating at a range of 1000m, but after improvement, could penetrate up to 122mm, and were renamed 7.62cm Pak36(r) gun. Until the new tanks were ready for deployment, 7.62cm Pak36(r) guns were to be mounted on the chassis of obsolete Pz.Kpfw.II and Pz.Kpfw.38(t) tanks for the creation of a stopgap tank hunter. The 38(t) tanks were based on the LtVz.38 tank, which was developed for use by the Czech company CKD (later BMM) for the Czech army in 1938. In 1939, with the annexation of Czechoslovakia, this tank went into production for the Wehrmacht. The base this Czech-made tank was combined with the Soviet 7.62cm Pak36(r) gun, resulting in the creation the Wehrmacht's fearsome tank hunter, the Marder III Sd.Kfz.139. The turret base of the Pk.Kpfw.38(t) was removed and a 16mm steel plate was attached in its place. The Soviet 7.62cm Pak36(r) gun was mounted on that plate, 11mm armor plating installed to the front and sides, and massive stirrups immobilized the gun.

The base this Czech-made tank was combined with the Soviet 7.62cm Pak36(r), resulting a fighting vehicle of considerable height. The base this model does not incorporate slide-molding techniques, but requires a fascinating assembly from several parts, offering the modeler with a truly pleasurable 1/35 scale construction
Since the chassis runner is divided by panels, assembly of the Pk.Kpfw.38(t) tank base offers a deep understanding of the actual construction. Learn all the intricacies of the real Marder III through assembly of this precise scale model!

Every part of Tamiya's Marder III has been recreated with stunning attention to detail. The ammunition rack and basket, slanted armor plating, leaf-spring suspension, large road wheels-no details have been left out!

The simple construction of this modified Soviet gun is beautifully illustrated on Tamiya's Marder III. No details of the fighting compartment have been overlooked. Also, the sighting equipment and front armor plate can be raised or lowered, even after assembly. 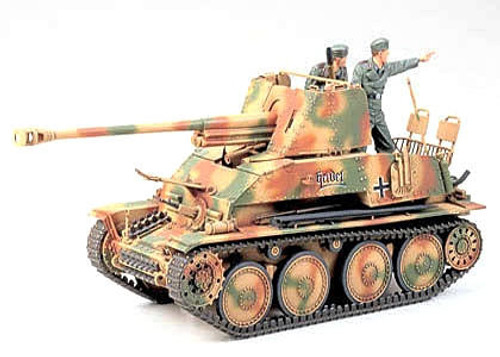