Created as part of a plan to attack major cities in the United States and the Panama Canal, the three I-400 class large aircraft carrier submarines were quite technologically advanced. Featuring an extremely long range and heavily armed with both torpedoes and deck guns, they were also equipped with catapults to launch their three Aichi M6A Seiran aircraft. While on their way to attack the Panama Canal, the submarines were ordered to attack the Allied naval base at Ulithi instead. However, hostilities ended before any attack could be launched. After surrendering to U.S. forces, the I-400 was eventually sailed to Hawaii, where they were studied and then scuttled.

- High-quality 1/350 scale assembly kit model of the I-400 submarine.
- Accurately reproduced hull features two-piece construction with upper and lower hull sections.
- Hangar hatch may be modeled in both open and closed positions for increased display possibilities.
- Details such as crane arm and antenna array realistically depicted with precision-made photo-etched parts.
- Metal parts for propeller screw shafts provide additional detail.
- Parts are included to allow depiction of the Seiran aircraft with wings in both extended and folded positions. Furthermore, photo-etched parts are used for aircraft propellers and dollies.
- Conveniently includes special display base 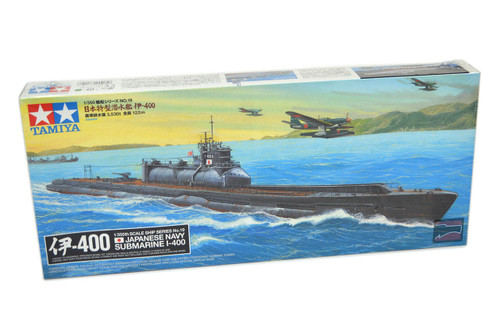