The P-47 was the first single-seated fighter to be equipped with a supercharger paired with a 2000hp engine, allowing it to fly at the same very high altitude as bombers. The P-47 was armed with eight 12.7mm machineguns. With the P-51 Mustang, the Thunderbolt constituted the main fighters of the US Army Air Force. This is the representation of P-47D early production that was nicknamed "razorback" because of the shape of its upper fuselage behind the cockpit. The P-47D was a high-speed, high-altitude capable fighter and escorted the allied bombers that were conducting raids over Germany. Its 1ton payload and its robustness made the Thunderbolt the perfect aircraft for ground attacking missions.

The US Army Air Force excellent P-47D fighter/bomber assembly kit. 1/48 scale, Overall Length: 230mm, Overall Width: 259mm. This is the representation of P-47D early production that was nicknamed "razorback". The massive form of the plane, especially its belly and its cowling, has been accurately reproduced. Flaps come as separate parts and can be attached in the up or down position. 3 types of mirrors, gun sights and propellers are provided. Engine cowling flaps and the intercooler air outlets on each side of the fuselage can be represented in the opened or closed position. 500 pounds bombs, rocket launchers and 2 types of drop tanks are part of the kit. A pilot figure and decals for two different markings are included. 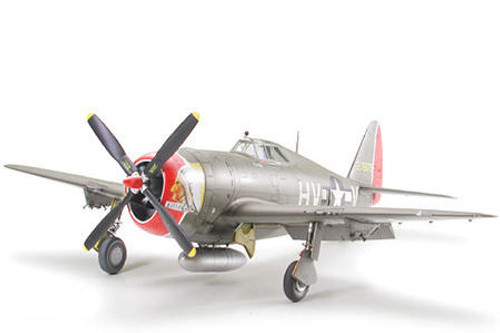