The RA-5C was developed in parallel with the A-5B, and first flew on 30 June 1962. The RA-5C incorporated all the new features of the A-5B, such as the humpback fuselage, the big flaps, and the leading-edge BLC system. The new BLC scheme proved a little tricky, as it required more engine power. As the RA-5C was substantially heavier than the A-5A, this meant that once the BLC system was engaged the aircraft lost power and tended to drop abruptly. The major difference from the A-5B was the RA-5C's equipment。The TV camera under the nose became part of the reconnaissance suite, but most of the gear was carried in a long slender "canoe" on the bottom of the aircraft's fuselage and running from the nose gear back towards the tail. The RA-5C entered fleet service in 1964. 43 RA-5Cs were built, following the 12 A-5Bs that had been completed as RA-5Cs. After this batch of 43 was completed, the 43 surviving A-5As and A-5Bs were rebuilt to RA-5C standard, and the production line was shut down. The RA-5C proved so useful in Vietnam that the Navy ordered 46 more RA-5Cs in 1968. Only 36 were actually completed, however, with the last rolling off the production line in August 1970. This final batch featured J-79-GE-10 engines with 79.46 kN (8,100 kgp / 17,860 lbf) afterburning thrust, as well as a leading-edge wing extension trailing back from the air intakes, plus slightly modified air intakes. By this time, the RA-5C had plenty of power and it was no longer such a handful on carrier deck landings 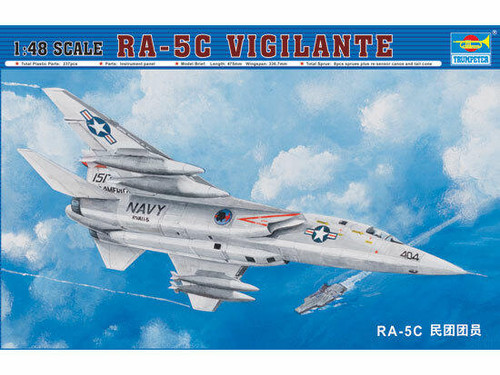