The Panzer IV was one of the most feared weapons in WWII, and would serve German forces throughout the conflict in the guise of a number of variants. The Ausf.H variant itself featured early, middle and late production types, all of which were armed with a L/48 75mm gun and featured “Schürzen” armor side skirts for greater protection. Late production Panzer IVs were identifiable by their tracks: they lacked a center guide. Upper road wheels had their rubber tires removed and were made into steel wheels, while the tank received cast metal idler wheels. 3,774 Ausf.H Panzer IVs were produced between April 1943 and July 1944, and it was eventually succeeded by the Ausf.J.

The Tamiya model in 1/48 scale captures every detail and nuance of the real life subject thanks to extensive research of the full size vehicle. 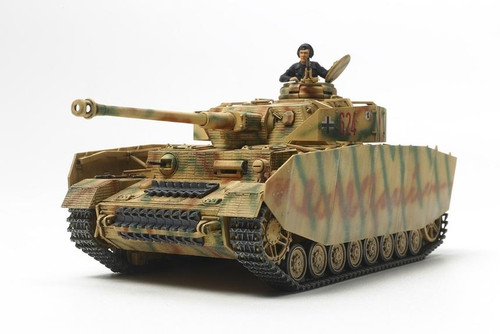