This precision model aircraft assembly kit depicts the Messerschmitt Bf 109 G-6 variant. It compliments Tamiya’s other variants such as the E-3 and E-4/7 Trop.

The Bf 109 is a legendary name in aviation, an aircraft which combined longevity and versatility in the hands of the Luftwaffe and other air forces. The G-6 was the most prolifically produced Bf 109, accounting for more than a third of the total. Introduced in early 1943, it could be fitted with underwing 20mm cannons in pods, or synchronized 13mm machine guns in distinctive bulges ahead of the cockpit, and was powered by the Daimler-Benz DB605A liquid-cooled V12, which gave a top airspeed of 640km/h.

• 1/48 scale plastic model assembly kit.
• The model recreates a parked aircraft.
• Richly-detailed depiction of the DB605A engine, a multi-part recreation. Engine cowlings can be depicted open to show off the beautiful rendering, complete with fine depictions of various auxiliary components. The cowlings can also be depicted as closed. Cowling and engine parts are attached via magnet to allow their exchange after the model has been assembled.
• Distinctive dual radiator flaps in wings can be depicted in up or down positions, or a combination of the two.
• Parts are included to recreate drop tank.
• Can be assembled with canopy in open or closed position.
• Kit includes 1 figure and 3 marking options. 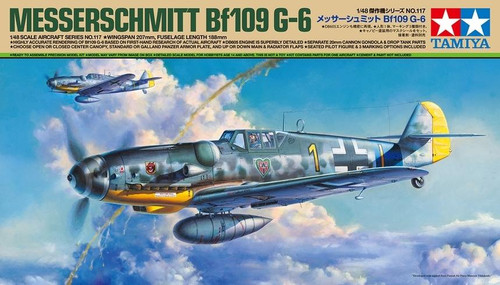