Following the Zero Model 21 (A6M2), which achieved overwhelming victories against Allied forces in the first half of Pacific War, the summer 1942 saw the introduction of the Model 32 (A6M3) which was powered by a Sakae 21 engine and an 11m wingspan with clipped wingtips. Although top speed increased, its range reduced drastically, therefore the Model 22 (A6M3) was rushed into development in order to correct the Model 32's shortcomings. Overall performance improved as the 12m wingspan and folding wingtips were reintroduced to regain maneuverability and new wing fuel tanks restored range to 2,560km. The Model 22 (A6M3a) which was fitted with long-barreled cannons was also put into production. Deployed mainly to the Solomon Islands from early 1943, Zeroes had fierce battles against U.S. fighters.

★1/48 scale plastic assembly model kit of the Mitsubishi A6M3 Model 22 Zero. ★Length: 190mm, Wingspan: 250mm ★Well-balanced form of the aircraft has been beautifully reproduced. ★Photo-etched parts depict the folded wingtip mechanism. ★The A6M3a which was armed with long-barreled cannons can also be assembled. ★You can choose to assemble the cowl flap in either open or closed position. Also, flaps can be depicted in either up or down positions. ★1 seated and 4 standing pilot figures included. ★Comes with 3 kinds of markings including one to depict the aircraft from the 251st Naval Air Group. 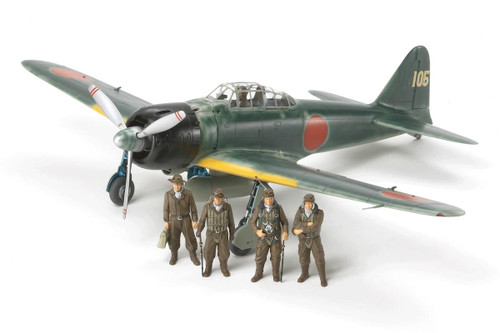