The Supermarine Spitfire needs little introduction, one of the best-known aircraft deployed by the Royal Air Force in the Battle of Britain, as British and German forces struggled for control of the skies over the English Channel. The Mk.I had a streamlined form with elliptical wings designed for speed, and was powered by a Merlin engine. This legendary bird has received a complete makeover from Tamiya’s designers with new tooling for an updated and more accurate appearance in the 1/48 Aircraft Series!

• 1/48 scale plastic model assembly kit.
• Can be assembled to recreate many of the extensive Spitfire Mk.I variants.
• Points of interest include superb detailing in areas such as the cockpit and panel lines.
• Separate parts are used to recreate main landing gear and horizontal stabilizers.
• Comes with 1 figure depicting a seated pilot.
• Photo-etched parts are included to recreate radiator, oil cooler, gun sight, seatbelt components and more!
• 3 marking options. 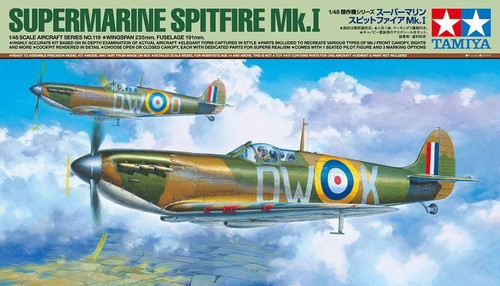