The powerful German Sd.Kfz. 186 “Jagdtiger” was built onto the elongated hull of the Tiger II heavy tank in the latter stages of WWII. Inside its mighty casemate was the 128 mm PaK 44 cannon, armed with shells that could pierce the armor of all opposing enemy tanks. This self-propelled ‘tank buster’ was deployed effectively and lethally against even the most recently introduced Soviet heavy tanks such as the IS-2. The Jagdtiger had a huge weight of almost 76 tons. The large cannon and heavy armor whilst effective, could not outweigh the poor maneuverability and low speeds of the vehicle in battle. The significant weight affected its reliability, and production volumes were also limited. However, the Jagdtiger for its offensive capacity alone, ranks as the high point of German production of self-propelled tank destroyers during World War ll. 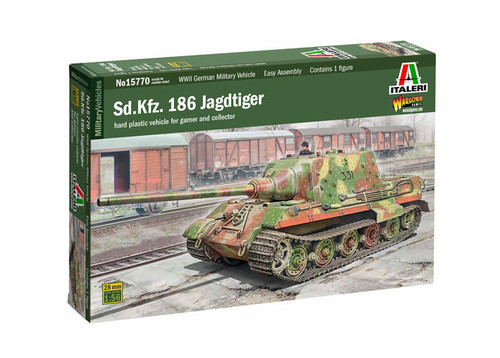