The Mogami together with three cruisers of the same type- the Mikuma, the Suzuya and the Kumano- was designed and completed in 1935 as a large-scale light cruiser of an 8500-class. Protecting the Mogami was thickened, highly shell-proof armor effective in warding off extremely large falling-angle shells of U.S. heavy cruisers. But most impressive was the Mogamis 152,000hp engine, the same employed on the battleship Yamato, the biggest battleship ever produced in the world. With the termination of the London Naval Reduction Treaty in 1937 the Mogami had its guns upgraded from 15.5cm triple to 20cm double guns. On March 30, 1942, the Mogami in cooperation the Mikuma and a squadron of destroyers sank the U.S. heavy cruiser Houston and the Australian cruiser Perth in the West Java area. In October of 1944, after going up in flames and being rendered useless from critical damage incurred by carrier-based planes during a battle off the Philippines, the friendly destroyer Akebono sank the Mogami with torpedoes, sending the cruiser to the depths of the Mindanao Sea.
Thirty years after its initial release, Tamiya presents the long awaited Mogami re-release with all new parts! Despite limited access to data (recovered photographs, and strategic drawings), Tamiyas designers have used recently available technology and talent to bridge the gaps and polish off the Mogami. Outside of W-Parts (common Waterline Series parts Japanese naval accessories), all of the kits parts will feature completely newly molded pieces. Hull has reproduced with left and right pieces. All accessories have been crisply recreated. Poly-caps allow for rotation of gun turrets. Previously, common parts had been used for the Mikuma and Suzuya, however, this time Tamiya refines the Mogami with all new specialized parts in the true tradition of the Waterline Series- testing the limits of bringing massive naval cruisers down to 1/700 scale with the utmost precision! 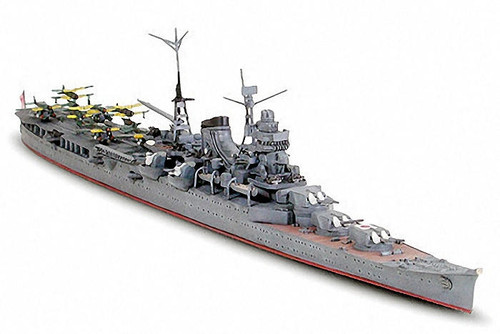