In the early 1960s, the USAF faced with the need of having aircraft capable of counterinsurgency operations. Along with the development of specialized aircraft, improvements to existing models were carried out to fulfill these tasks. Improvements, among other things, consisted of strengthening the wing structure and adding eight underwing points of the weapon suspension, installing an increased area rudder, adding fuel tanks at the wingtips and installing dual controls. In the spring of 1964, the USAF received the first B-26K Counter Invader, and the entire order was completed by April 1965. In the spring of 1966, it was decided to deploy these aircraft to Southeast Asia. From the airfields of Thailand, they made combat missions to the territory of Laos.

As Thailand did not allow the bombers to be based on its territory, beginning in May 1966 the aircraft were designated as ground attack aircraft – designated A-26A.

It should also be noted that most of the Counter Invader’s combat missions took place in the dark. The reason for this was the Vietnamese air defense, which posed a serious threat to piston-powered planes with low speed. 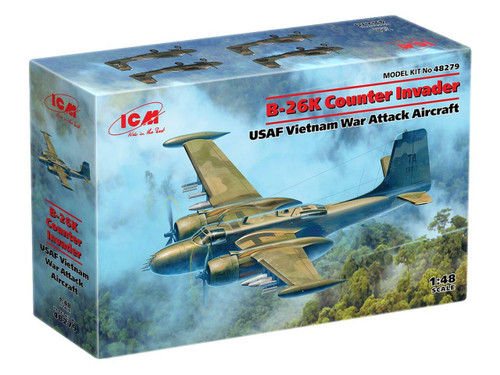